Skip Gallery – it’s exactly what is says on the tin. A gallery in a skip.

You won’t want to miss this! 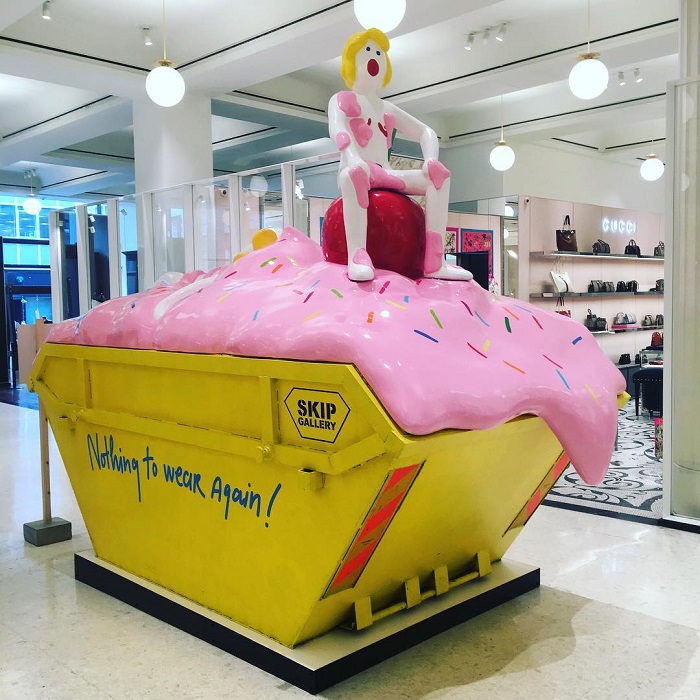 Serbian artist Maja Djordjevic brings her signature ‘pixel’ nude girl to Selfridges – a playfully pink cartoonish sculpture with a computer-doodle aesthetic. Like many of Maja’s works, the sculpture presents a tragicomic scenario, exploring themes of feminine power and the female gaze. Djordjevic’s work has been shown at Belgrade’s 57th October Art Salon’s Be Yourselfie group exhibition, at LISTEArt Fair in Basel, and in solo shows at the Dio Horia gallery in Mykonos and the Hole Gallery in New York.

Artist and self-described, stalker, make-up enthusiast and YouTuber, Paul Kindersley creates a stage for an ongoing performance incorporating a vivid, madcap and occasionally confounding universe around the skip, with live action, dance, drawings, sculpture and film. Graduate of Chelsea College of Art and winner of the Transition Gallery Prize, Kindersley uses drag to parody cultural, social and political systems.

Fitting rooms in the Designer Galleries on 2 Claire Pearce’s work is often rooted in the relationship between contemporary female identity, the internet and popular culture. This residency sees her transform the fitting room into an interactive installation that interrogates the role of the space as a threshold between public and personal, as complicated by the ‘fitting-room selfie.’ Pearce has exhibited widely across the UK and was awarded the Anthony Dawson Print Award in 2018, and the title of ‘Best Visual Artist’ at the Edinburgh Student Arts Festival 2016.

So, go on and get #arty while you shop!